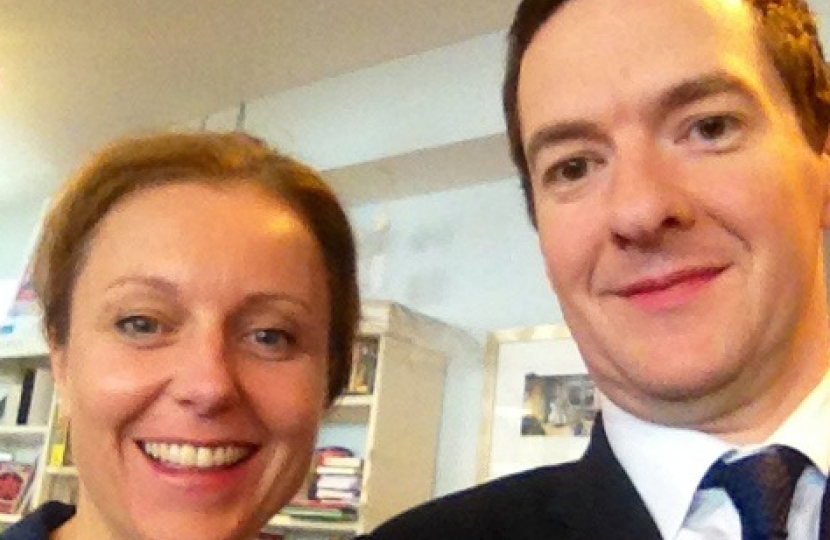 The Chancellor of the Exchequer, George Osborne, stopped off at the Mainstreet Trading Company, St Boswells on Friday 4th July and took the opportunity to meet a small group of Borders business people in order to hear about the challenges that they are facing. Whilst the Chancellor did not promise to wave a magic wand and solve all of these problems instantly, the hour he spent talking and listening allowed him to take away a ‘shopping list’ of concerns for further thought and for discussions with colleagues about what could be done to help.

Several of those present were involved in the manufacture or sale of garments and all highlighted the threat posed to high quality, high value local products by lower quality, lower cost products being misleadingly packaged and marketed to appear as if they were produced locally. The threat from low cost competitors was made worse at present by the strength of the Pound, although the Chancellor was able to point out that this helped to hold raw material and fuel costs down. Other items on the textile wish list included help with training and capital expenditure. On a related point, the bookshop hosting the meeting highlighted the uneven playing field small local businesses faced in competing with multinationals who were able to organize themselves so as to minimize their tax liabilities—to the detriment of both local employment and the Exchequer. Here, the Chancellor was able to report that he was working with international colleagues to update taxation systems that had never been designed to cope with trading practices deliberately engineered to minimize liabilities.

A number of those present mentioned that in a rural area such as the Borders many people had to travel long distances by car and high fuel prices were a particular concern. One of those present, the managing director of a local bus company, also stressed the difficulties fluctuating prices posed to his company when attempting to set fares or negotiate contracts and this was made even more challenging by reductions in subsidies for rural routes. Besides the price of fuel there was also discussion about options for upgrading various road, rail and bus links, with the individuals present voicing a number of different opinions about which road should be dualled first and the benefits of new rail lines and stations versus bus services. In one of the few explicit references to the impending referendum, the bus company boss revealed that his vehicles cross the border 76 times a day and that any restrictions at border crossings or a divergence in the regulatory environment on either side of the border would be less than helpful.

To the surprise of all those around the table, not least George Osborne, one of the attendees reported that his major travel related concern was the possibility that Boris might increase the London congestion charge. As we each scrambled to imagine how such an increase might have a big impact in the Borders, he revealed that he had several hundred telecommunication engineers working at sites in London every day and any increase in the charge would have a major impact on his costs. All roads really do lead to Galashiels.

Several businesses complained about credit terms and the way large companies exploited their size and buying power to delay payments for longer and longer and also highlighted abuses of the system overseeing companies that enter administration—one even backed up what was said in the discussions by handing the Chancellor a letter in person.

Tourism is an important source of revenue for the Borders and one local hotelier felt it was being held back by the high rate of VAT, pleading that it be replaced by tourism tax at a lower rate.

Had we had all day other topics would no doubt have come up but all too soon it was time for the Chancellor to head off to Rosyth and the naming ceremony for another fine Scottish product, the Queen Elizabeth II aircraft carrier.