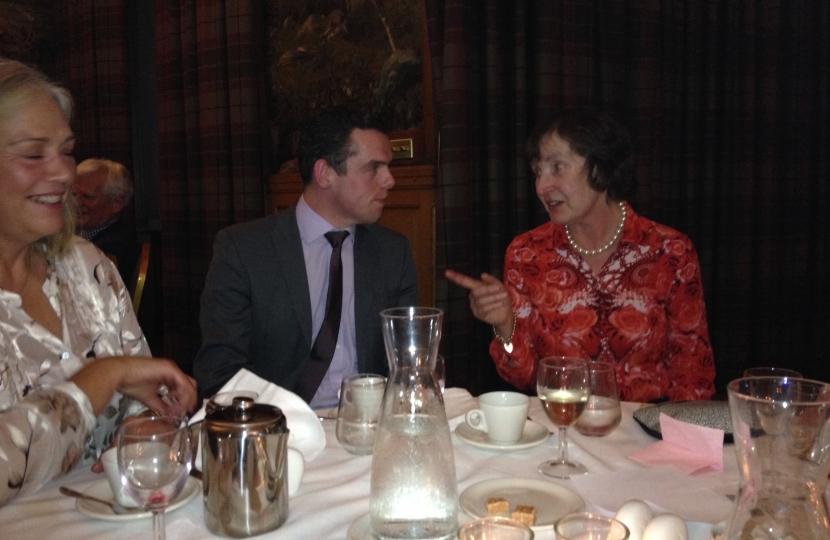 The Tweeddale branch snatched triumph from disaster on Wednesday night and held a very successful dinner in the Bannockburn Room at Peebles Hydro attended by members of the branch, all the party’s sitting Tweeddale councillors and candidates, and no fewer than three MSPs.

Sir Patrick McLoughlin MP, the Chairman of the Party and the Chancellor of the Duchy of Lancaster, who had originally been scheduled to speak at the dinner, was unable to attend due to developments at Westminster and the need to vote in the House. At very short notice, Douglas Ross MSP, the party’s Justice spokesman at Holyrood, stepped in to give a very amusing account of his parallel career as a football referee and how it had led to his meeting his future wife. The branch and association are very grateful to Douglas for saving the day or, rather, the evening.

The dinner was an excellent opportunity for our new trio of Tweeddale candidates in next May’s council elections – John Anderson, Shona Haslam and Eric Small – as well as our Council Group Leader Cllr Michelle Ballantyne to meet local members and for us all to express our thanks to our two retiring local councillors, Keith Cockburn and Gavin Logan.

In thanking Douglas, Fiona Campbell, our Tweeddale Chairman, picked up on his footballing interests to liken his riding to our rescue to scoring an injury time winner; but modestly failed to mention the role played by one (maybe more) of her distant ancestors in the scene depicted on the walls of the room in which we dined.