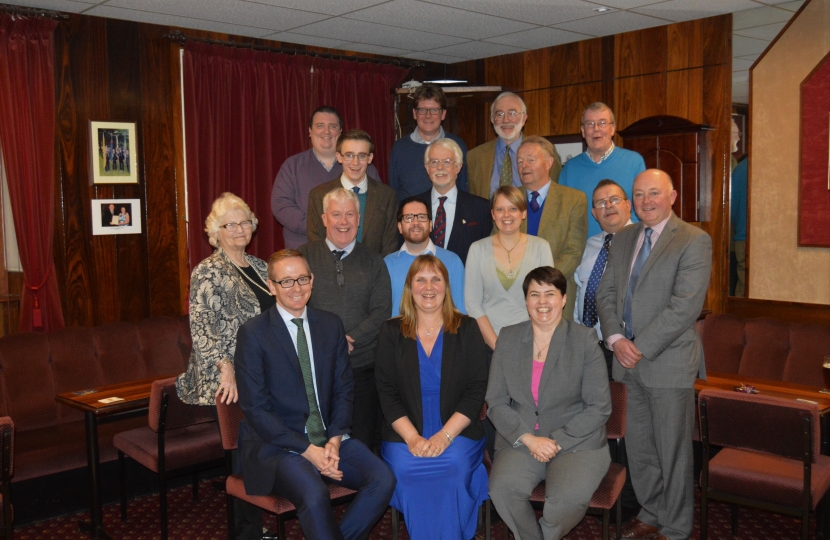 Ruth Davidson, the leader of the Scottish Conservative & Unionist party, visited Selkirk Conservative Club on the evening of Monday 21st November to meet the candidates adopted by the party for next May's Scottish Borders Council elections and to speak to an audience of around one hundred party members who had gathered at the club.

Ruth was introduced--though in truth she needed no introduction--to the audience by Cllr Michelle Ballantyne, the leader of the Conservative group on Scottish Borders CouncilI, who has led the party's campaign for a local government that addresses the issues that matter to those who live in the Borders. In her talk Ruth stressed how overtaking Labour as the second largest party at Holyrood had been a tremendous achievement, putting us in a better position to hold the Scottish government to account, but it was not the ultimate goal. The next challenge is for the party to substantially increase the number of its councillors at next May's elections across the whole of Scotland and in Scottish Borders in particular. Success next May is vital not just because the Scottish Borders needs good local government that focuses on the region's real needs rather than vanity projects; but also because Scottish local government needs to be in the hands of those who will stand up for local democracy and resist the centralizing efforts of the current Scottish government.

Ruth urged the members attending the event to take encouragement from the resounding success the party enjoyed last May to go out and campaign even more actively on behalf of our council candidates. At the end of he talk, Ruth took a number of questions from members and John Lamont MSP then thanked Ruth for her talk.

Following the drawing of the traditional raffle, members attending the evening were treated to a sumptuous spread prepared by Selkirk's Conservative Ladies and the Association would like to thank them for their efforts and Selkirk Conservative Club for providing such a welcoming venue for the event.