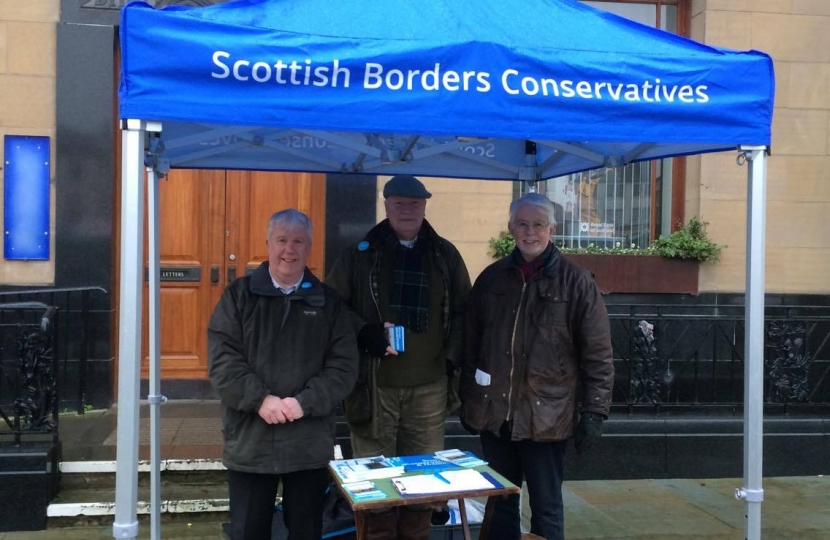 Kelso ward councillors Simon Mountford and Tom Weatherston spent a busy two hours on Saturday morning manning a street stall held at the same time as the monthly Farmers' Market in Kelso Square. The stall tempted a steady stream of shoppers to cross the road from the market to chat about the upcoming council elections, which take place on 4th May, and the opposition to a second independence referendum that is being spearheaded by the Scottish Conservatives and Unionists. Many took the opportunity to sign our petition against the referendum and many more have expressed their opposition in the doorstep surveys currently being carried out in Kelso and other wards by our candidates.

Although most visitors to the stall were local residents, the lure of the Farmers' Market ensured that there were a fair number from further afield; and so it was an opportunity for us to hear the views of the wider Borders community. Whether they were from Duns or Kelso, the message from our visitors was the same: no to a second referendum and no to the stripping of powers and funding from our local councils. What Borderers want is a council with the power to tackle local issues and one that concentrates its energy and resources on doing so.

The Kelso stall was just one in a series of Saturday morning street stalls all across the Borders that we will be organizing between now and the council elections in order to give voters a chance to talk to our candidates about the issues that really matter to them. If you are out and about on a Saturday morning look out for one of our distinctive blue gazebos on a pavement  in your home town and be sure to tell our candidates what you would like the council to focus on after the election.