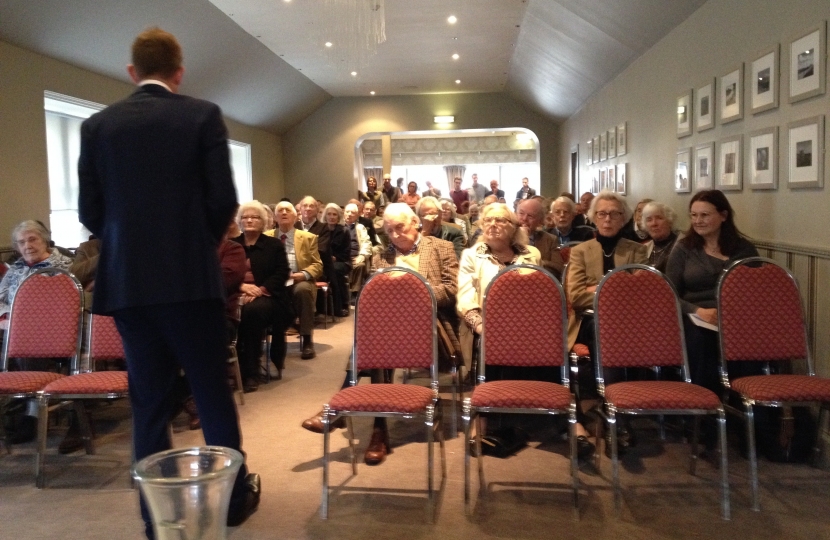 At a packed Extraordinary General Meeting of the Berwickshire, Roxburgh and Selkirk section of the Scottish Borders Conservative & Unionist Association held at the Buccleuch Arms, St Boswells on Saturday 22nd April 2017, John Lamont MSP was unanimously adopted as the Association's candidate to contest the Westminster constituency of Berwickshire, Roxburgh and Selkirk.

In his acceptance speech John said,

"We live in the most marginal constituency in the whole of Scotland with just 328 votes separating us and the SNP.

But we live in a country being ripped apart by Nicola Sturgeon and the SNP and their obsession with having another referendum to break up Britain.

So this is an important election for everyone in the Borders. But it is especially important for unionists; for those of us who want Scotland to remain part of a strong United Kingdom.

It will be a choice between a Conservative and Unionist candidate who will stand up for Scotland in a strong United Kingdom or an nationalist who’s number one priority is the destruction of our great country.

This is not a general election that we were expecting but it is an election that we are ready for.
The Scottish Conservatives in the Borders are ready for a campaign, we are organized, and we are optimistic about the prospect of electoral success.
We have a clear election message – only a vote for the Scottish Conservatives will ensure we get the strong leadership we need to get the best Brexit deal for the whole country.
And only a vote for the Scottish Conservatives will send a strong message that we oppose SNP’s divisive plan for a second referendum.
We know the SNP will use this campaign to try and manufacture a case for separation. And with Jeremy Corbyn having already said he is ‘absolutely fine’ with an immediate referendum, we also know that Labour can’t be relied to stand up to them.
By contrast, the Scottish Conservatives will stand up for people who oppose the SNP’s plans.
The choice is simple: it’s between a strong government led by Theresa May working to get the best Brexit deal, or a weak Labour government, led by Jeremy Corbyn, which cannot stand up to the SNP.
By voting Scottish Conservative and supporting Scotland’s place in the UK, you can be proud and confident that the majority of Scotland agree with you and you don’t need to apologize for your view.

We won’t be told this time round that we’re some-how less Scottish than someone who wants separation. We are the majority of Scotland and it’s the separatists who aren’t acting in the interest of the country.